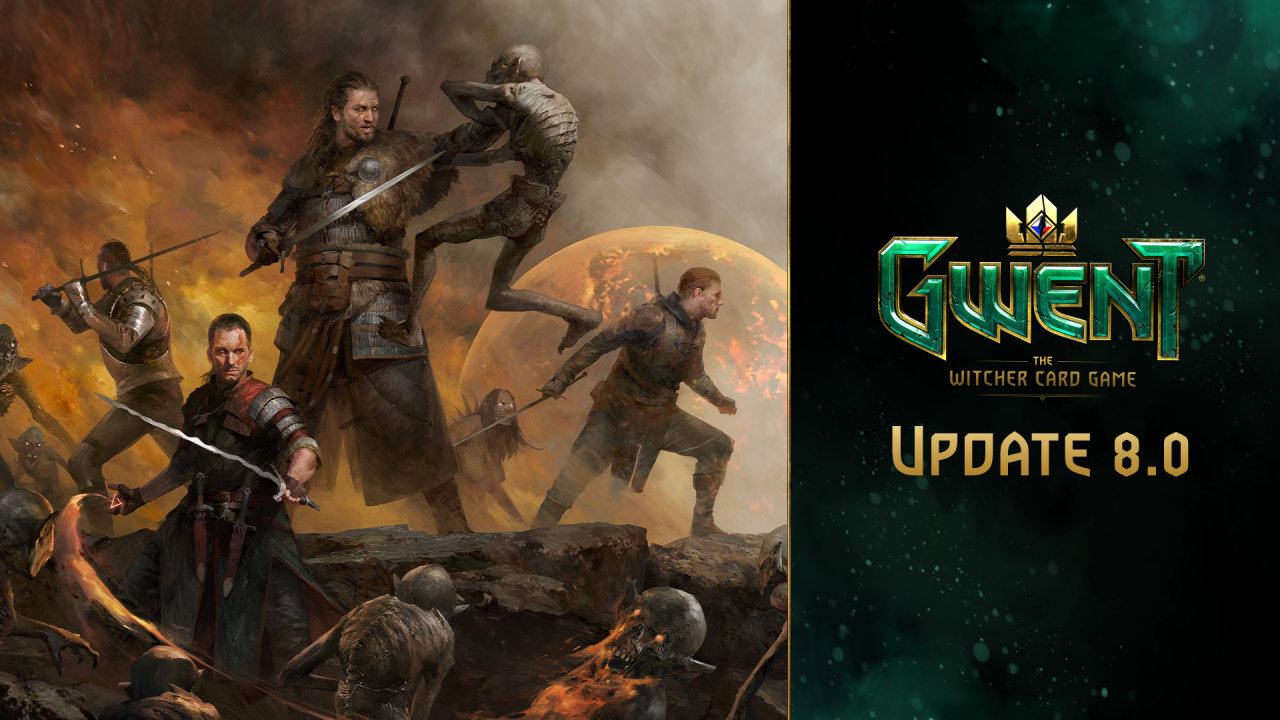 Way of the Witcher is almost here and with it a considerable amount of changes. As many of you guessed, some are centred around the "Witcher" tag, so that already existing cards interacting well with Witchers are properly adjusted for the arrival of the new ones. Of course aside from that, there were multiple balance changes to other cards and you can read about them in detail below.

And with the festive season already in full swing, we also introduce the feature of Gifting so you can send goodies to your friends in GWENT and celebrate together.

Closing the list of changes are game fixes, some very much anticipated (Eredin!), some Quality of Life, but all improving the experience we'd like to offer you.

Redraft, Settings and Quit buttons have been added to the Draft user interface.

Eskel, Vesemir and Lambert power changed from 2 to 3.

Provision changed from 8 to 7.

Adrenaline 4: Summon Eskel/Vesemir/Lambert from your deck to this row.

to make it less flexible and force to commit in round 1.

Deploy: Boost all allied Witcher units on the battlefield by 1.

Adrenaline 5: Also boost your Witcher units in hand and deck.

Developer comment: With plethora of new targets for Vesemir Mentor,

his overall value increased a lot. Similarly to the Witchers trio,

we introduced Adrenaline to the effect to keep it in check and force commitment.

Roach provision changed from 10 to 9.

Knickers provision changed from 9 to 8.

Dandelion: Poet provision changed from 12 to 11.

Portal provision changed from 13 to 12.

Deploy: Summon a random 4 provision unit from your deck to the left of this card

After 3 turns, Summon a random 4 provision unit from your deck to the right of this card.

Developer comment: In the past, the strategy to nerfing Portal was to nerf its targets.

This time we would like to experiment with something different by removing one of Portal most oppressive feature: the ability to immediately put two engines on the board.

This allows us to bring Portal down one provision and most importantly rehabilitate its old targets by putting them back to 4 provisions.

Haunt provision changed from 13 to 14.

Old Speartip provision changed from 13 to 12.

Deploy (Melee): Draw a card, then discard a card. If discarded card was a unit, boost self by its power.

Developer comment: New month, new Imlerith! We are adjusting Imlerith to have better synergy with Way of the Witcher cards such as Dol Dhu Lokke.

Brokvar Hunter provision changed from 5 to 4.

An Crate Blacksmith now has 1 Armor.

Vernon Roche provision changed from 12 to 11.

Lyrian Cavalry provision changed from 5 to 4.

Elven Swordmaster provision changed from 5 to 4.

Damage dealt increased from 2 to 3.

Affan Hillergrand provision changed from 9 to 8.

Braathens power changed from 3 to 4.

Deploy: Create and play a bronze disloyal unit from your starting deck.

Developer comment: We would like Braathens to be a card that supports Assimilate and Spies archetypes, rather than just a good midrange card that can be put in any deck.

To make it so, we are adding a deck building condition that shouldn't be a problem for archetypes mentioned, but other archetypes can still run him if the player is willing to adjust their deck. At the same time, we are improving his stats.

Emissary boost to a unit increased from 6 to 7.

Nauzicaa Sergeant provision changed from 5 to 4.

Master of Disguise power changed from 3 to 4.

Gifting. New feature giving players the ability to send gifts to their friends. (Available only for Meteorite Powder and Real Money purchases)

Assire now reveals the picked card before putting it in the deck.

Developer comment: Quality of life change. This removes the need to check graveyard to know which card the opponent put back in the deck. Makes already shared information more accessible.

Ampibious Assault, Blood Eagle, Avallac'h: Sage and Novigradian Justice will now properly show a shuffled version of the deck instead of listing the cards in order.

Vrihedd Officer tooltip was harmonized with other similar tooltips.

Defender is now correctly referred to in tooltips as a status.

Units with the Bounty status will now grant coins correctly only when destroyed.

Master Mirror will now correctly transform cards that are able to interact with the deck, such as Oneiromancy and Matta Hu'uri.

Cantarella is now able to play Trap cards from the opponent's deck.