Season of the Dryad is here!

The new season of the Dryad has arrived and with it the latest Update 7.2!

This includes a big overhaul of the leader abilities in the game and the regular balance changes to existing cards.

On the end of the player's turn:

Boost player's even power units by 1

Developer Comment: Ciri will now let the player choose which units to target. This part of the ability is still meant to give Ciri additional value only when board state allows it and picking where those pings go will make that more reliable against Armor and similar effects.

Developer Comment: Ethereal's ability is now triggered by Order and it can get Zeal if it is played from hand. Limiting the ability in this way will make it possible to play around at all, since all Ethereals being active at all times required just one trigger to stop any interaction with the opponent unless they have a very specific counter. Since it's a pretty steep drop in power, the Provision cost was lowered.

Developer Comment: All of the leader abilities that allowed you to pick a specific card and play it as an extra in a turn have been rotated out. As the pool of cards have been growing with every expansion, so did the number of cards you could play with those abilities, leading to them dominating the game with sheer power and versatility. Every faction have been compensated with brand new Leader ability for this loss.

Developer Comment: As Shield can be a source of extra points, since stopping any random damage effect is extra points, the number of charges was increased to roughly match this power lost. Veil is a little harder to get value out of than Shield, but should do a better job at protecting the Boost provided by the ability.

Developer Comment: Now instead of putting all the extra power on one card, making it doubly vulnerable to removal, Force of Nature will spawn and play Woodland Spirit. While this token does not have any abilities on their own, it will trigger Thrives and start at 9 Power.

Developer Comment: This brand new ability lets the player establish first Frost on the board, or shuffle opponent's units around to take a better advantage of existing Frosts, while adding to their duration. It should work well with existing Wild Hunt cards or be a tech choice for other decks that lack ways to control their opponents, as it makes quick work of card abilities locked to specific rows.

Developer Comment: Sacrificial Vanguard did not play additional cards in a turn, but Discard as a mechanic strictly builds carryover so making any abilities that work with it or attaching any extra value to it ends up putting power in 2 rounds, which is why we prefer it being a thinning tool instead of something players would build their decks around, which is why the ability is rotating out of the game.

Developer Comment: In addition to playing a decent Alchemy card as an Order, Battle trance will also heal a random ally by 1 when an Alchemy is played, making picking Alchemies over cards that shrug off being damaged a viable way to build a deck.

Developer Comment: Rage of the Sea is a rather straightforward way to put wounds on enemies, using Rain to do so, while also spawning Beast tokens on player's side of the board in the form of Sirens, ensuring that all the effects that do require Beasts on board have targets.

Developer Comment: Holger Blackhand has received a 2 Damage Deploy to bump up the points you can expect from playing him, without making him very hard to remove from the board.

Developer Comment: Brokvar Hunter will now react to Beasts being played instead, because he is a hunter and hunters hunt Beasts.

Developer Comment: Greatsword has lost his ability to Boost indefinitely and will be healing back the Damage he inflicts on himself as part of the Deploy. This re-imagination of his ability sets a clear point ceiling for the card, while also creating new synergies with self wounding archetypes or cards that bypass Deploy abilities like Sigrdrifa's Rite.

Developer Comment: Mobilization remains similar in it's effect, but it no longer plays the card you target, or requires you to keep a copy in your deck, making it more versatile and easier to use. To make sure it stays close to its current power level, it is limited to Bronze Soldiers only, which still leaves players with a sizeable pool of targets and makes Cintrian Royal Guard dream a possibility.

Developer Comment: Pincer Maneuver retains a similar effect without the "play a card" component. Extra consistency for card combos and 5 point boost for the drawn card should keep it very impactful in the round it is played in.

Developer Comment: Vicious Slash did not play additional cards in a turn, but because it hardly fits with what Northern Realms as a faction wants to accomplish and does not have any existing synergies, it will also be rotating out.

Developer Comment: For a while we thought that the previous version of Carapace would find a better home in Northern Realms, as protecting their engines and existing Shield synergies would make it feel right at home. Shield Wall is exactly this, with a little better distribution of charges, it should make it quite tricky to deal with players engines, or make a reliable setup for King Roegner.

Developer Comment: Siege Master's Deploy ability was changed to Order so he can now be played before the Siege Engines, making it easier to take advantage of his Resupply. His power was raised to make that play a little safer.

Developer Comment: Similar to Siege Master, Rivian Pikeman's Deploy became order and he got extra Power as a compensation. Northern Realms have a couple of synergies with Orders which should make him easier of a consideration for some decks.

Developer Comment: Harmony is going back to working as it did before the change, it will trigger regardless of the row the unique tag is played in. Our change to it made it a little bit more awkward to use than we wanted and with main ways of abusing the mechanic are gone, so it seems fair to restore it to the original state.

Developer Comment: Call of Harmony will spawn and play Dana Meadbh, that in addition to having Harmony herself, has a unique Relict tag which will always trigger all the Harmony cards already on the board.

Developer Comment: Nature's Gift makes it so every Nature special played spawns at least 1 Wandering Treant, thanks to it's Symbiosis. Straight Boost with charges could be hoarded to be a last play in a mostly spell based deck, which is why Vitality seems like a better fit for it, in addition to matching the theme better and having some existing synergies.

Developer Comment: If you control any of the 3 Zoltan cards that exist, Zoltan's company will make every Dwarf on the chosen row hardier. While this does not rise the power of the card much, it just makes sense for it to react to Zoltan in some way.

Developer Comment: Vrihedd Brigade's Deploy and passive abilities were split so the player can now choose where the first ping goes, but the passive remains random. It should make playing the card out of hand feel better overall.

Developer Comment: Mahakam Volunteers can now be played on any row and will trigger as long as there is a Dwarf on board, giving the player a better choice on which row they want to have more Dwarves in.

Developer Comment: Morvran is back and playing him will let you draw up to 3 cards from the top of the deck, then place the same amount back in the order you choose. Listing all the things one could do with this ability would take a while, so let's just say that you should make sure you have space in your hand first to take full advantage of it.

Developer Comment: To the dungeon with them! Imprisonment is a simple and effective way to control what your opponent does on the board. On the surface it might look that the ability is only 6 points, but value of the status is hard to predict, and Nilfgaard has multiple ways to benefit from applying and maintaining Locks, which should make it a great addition to some decks.

Developer Comment: Imperial Formation has lost a charge and gained 1 Provision bonus in return. That change should make it a little bit less explosive when combined with some of the Soldiers while keeping most of its power intact.

Developer Comment: Let's be honest, Playing this card on Melee row, that was also highlighted when you were holding it, was not really a condition, so now Impera Brigade will require any Soldier to be on board anywhere before triggering, but provide more points if they do.

Developer Comment: Nauzicaa Brigade now has a contingency plan for when none of the enemies are buffed. This change should make it a little safer to include in the deck, as it now can finish off severely wounded units.

Developer Comment: Vincent's stats were adjusted to closer match raw removal power he provides. He has slowly started becoming infamous, as his trigger condition turned out easier to fulfil than it was when the card was introduced and most people that encounter him probably saw this change coming.

Developer Comment: Because of Ffion playing Battle Preparation as part of his Deploy, the card ended up having a bit lower power on it's own than you'd expect from a Bronze. We have adjusted the Tactic to be more competitive and Ffion lost one point to stay at the level he is now.

Developer Comment: If you have ever been caught in a situation where you have all the coins with nothing to spend them on, here comes the Pirate's Cove to fix it, providing a spender and a handful of change on demand.

Developer Comment: As Sacred Flame is an Artifact and thus it takes a space on the row it used to boost, now it will boost all the Firesworn allies instead, raising the potential points you can get from its Order by a lot.

Developer Comment: Ewald's ability stays Damage, but he will now deal a set amount of it, which will change depending on the status of his brother.

Developer Comment: Horst will now provide you with coins and his Profits will change depending on the status of his brother.

Developer Comment: Post it's ability adjustment, Whoreson's Freak Show seldom sees play outside of Arena, where it breaks the game. For this reason, the old ability was retired and it will now do exactly what Ewald Borsodi did, leaving the brothers to be rebalanced separately with emphasis on their bond. 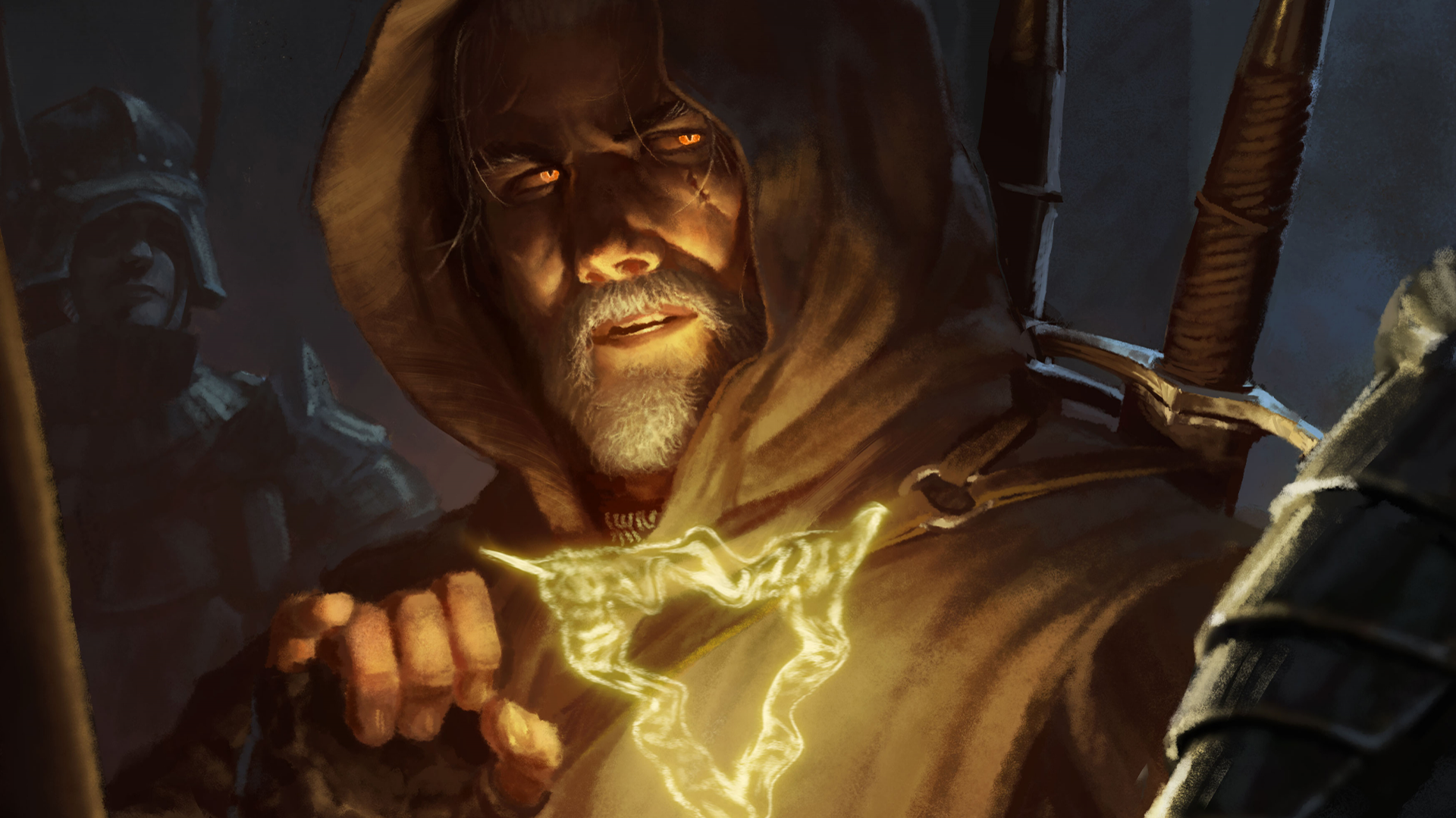